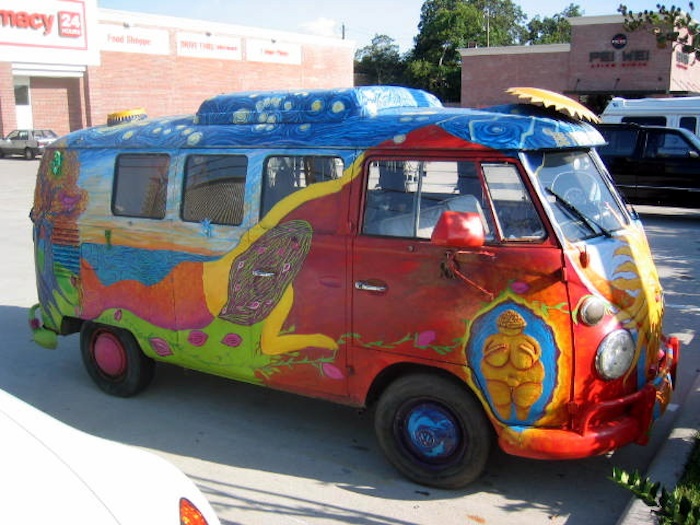 You can almost picture yourself at Woodstock, surrounded by brightly painted ‘Splittys’, wafts of grass and the poetic tones of Bob Dylan floating on the air. An iconic symbol of the sixties, the VW camper van is synonymous with alternative culture. But when and how did it become such an iconic vehicle of the C20th?

The split screen van or ‘Splitty’ became a success in the US after a whirlwind “Think Small” advertising campaign for the Volkswagen Beetle swept the states in 1959. Although the camper didn’t take off like the Beetle, its sales increased as the Volkswagen name was promoted across the USA. It was not long before this old van was identified as an extremely affordable and useful vehicle, and in the 1960s there was a surge in purchases.  One  of the reasons it became especially popular with the burgeoning counter-culture was that the VW camper van offered a space for combined living, playing and working.  It was identified with a carefree, no strings lifestyle.

Along with the ability to customise both the interior and paintwork, it became cool, and was gradually adopted by hippys and surfers as a flagship vehicle. The VW badge on the front of the Splitty was often changed to the anti-war symbol; others strapped surf boards to its roof. With its ability to carry numerous passengers and offer casual living accommodation, the VW camper van was propelled to the top of the vehicles must have list for anyone living outside the mainstream of 'straight' society.

Surfers could pull up next to the beach, surf, get changed, have beach parties and then just open their camper doors and sleep. Hippies could travel, pull up at festivals and love-ins, get stoned and just crash. It was liberating for the younger generation who could now customise their vehicles to reflect their culture, their political thoughts and their personality. With its soft curves and inoffensive presence, the VW camper represented an image of life, vitality and peaceful interaction.

The affection for this endearing van continues right up to today.  Its link with counter-culture has never been as strong as it is now. This is not the act of reminiscing for a by-gone era, but rather stems from the fact that being part of something free spirited and revolutionary (even if it's just for a weekend!) is still a powerful and crucial pull. The love and time that is spent on restoring these cute little vans clearly demonstrates the affection remaining and the appeal of stepping temporarily out of the rat race. There are few motorists who do not smile when passing a VW camper. They really do have a universal appeal!