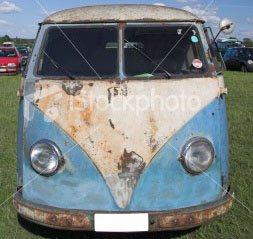 The birth of the VW camper has been ascribed to Ben Pon, a Dutch Volkswagen importer who visited the Wolfsburg factory.  The precise time and date of his visit has been lost in time but the story hasn’t.  Whilst visiting the factory, Pon witnessed the German factory workers using a form of van.  This van was constructed from a VW beetle chassis and welded pieces of metal from the factory floor. Used to transport heavy parts, it was the inspiration for the 1947 sketch which became the future VW type 2 Transporter. No one recorded the discussions that Pon had with the VW engineers, but Heinrich Nordhoff, the managing director from 1948, decided to work on the concept.  With this scribbled sketch the VW engineers put into full production the VW bus at the Wolfsburg factory, Germany in 1950. Later in 1956, Volkswagen moved the Splitty from its first home the Wolfsburg factory to it’s a new factory in Hanover.

The first VW bus was a simple construction and at its unveiling behind closed doors in 1949 it was nicknamed the ‘Bulli” which in German reflected its beefy appearance.  It was a curved box, with a driver at the front and an engine in the rear.  The VW bus was constructed using a VW Beetle engine and axle with a ladder frame.  Its interior was basic with eight seats; it had the option to remove the last two rows for loading goods.  Its driver was positioned directly over the front wheels, unlike the vans of its time which were sat back due to the front engine.  To many this was a revolutionary concept and soon other major car manufacturers began to copy.  Soon Fiat, Citroën and Bedford were designing and producing their own versions.

The first generation of  Type 2 transporters, with their split windscreen, was known as the T1 - what contemporary enthusiasts call the 'Splitty'. This model was first produced as the Kombi. It was furnished with uninviting vinyl seats attached to the floor, with bolts that could be undone enabling the seats to be removed quickly.  Soon followed the Samba bus supplying a more luxurious drive with better seats and rear window; it was presented as the flagship of the Transporters.  Eighteen months later the VW pick-up van was introduced and in 1954 they were preparing the ‘Splitty’ for right hand drive. But it was back in 1951, after Westfalia converted the VW split screen bus  into a camper, that the fun really began.  Although the concept of a camping style vehicle had been in existence since the first mass production of the car and its independent commercial production in 1930s America, it was the VW Splitty that really captured public imagination. It has retained its iconic image over 60 years.

Westfalia was a coach building company from the German town of the same name.  It worked exclusively with VW to produce the first camper van, with all the tiny attachments which made the bus a home from home.  It featured luxurious furnishings and additional features like a clock and radio on the dashboard, an extending roof, and a fully kitted out kitchen with a fridge. Like all the VWs, the other Splitty models like the Panel, Kombi, the Westfalia camper developed and evolved with new engines and features.  Engine sizes were increased and the electrical system had been increased from 6v to 12v just before the ‘Bay’ VW was introduced in 1968. The Bay replaced the Splitty as the new generation Type 2 van, and was the first of a series of models which continued to evolve from 1968 to now.