To maintain its lead in the world market, in 1968 Volkswagen introduced a new model known as the ‘Bay’ window, which replaced the original ‘Splitty’. What made this new generation of Type 2 so different was its lack of a split windscreen. 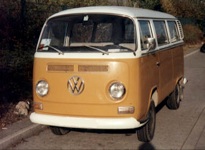 This new model was heavier and bigger with a gradual change in appearance.  There were safety additions, for example the steering wheel was padded and grip bars put in.  The Bay as a camper was larger than the previous ‘Splitty’, and with the major conversions - Devon, Viking, Danbury, Dormobile and Westfalia - it retained VWs position at the top of the small van market. Our Q & As page has more info about the specifics of these conversions.

The most well known pop-top conversion was the Westfalia, which converted thousands of Bays between 1968 and 1979.  With the Westfalia conversion's success, many competitors started to produce their very own pop-tops, although in America the most popular conversion continued to be the Westfalia or ‘Westy'. The exterior of the ‘Bay’ continued to evolve until 1974, with the movement of the indicators, redesigning of the bumper and the resizing of the VW badge.  After this date only mechanical changes were made. 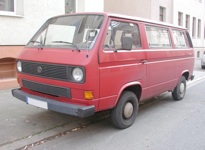 In 1979 Volkswagen introduced the new model T3 or T25 as it is known in the UK.  It can only be assumed that the difference between the names was a marketing process, with different names being adopted in Europe, the UK and even in America.  This model moved from the curves of the Bay and Splitty to a more boxy, angular appearance.  The T25 had a number of distinctive features: firstly, the front of the vehicle was strengthened, secondly, it now had considerably more internal space and finally, from 1981 onwards, the T25 was driven by a water cooled engine.

Internally the appearance had also changed; many T25s had air conditioning, alloy wheels and more comfortable furnishings.  The Westfalia conversion became extremely popular and included pop-top roof, sink, refrigerator and stove.  The T25 had two camper options coming from the factory: the basic and the ‘Weekender’. Due to the close link with Volkswagen, Westfalia conversions have become very popular and collectable.  Among the T25 models, there are variants known as the 'Joker', the 'California' and the 'Atlantic'.

It was only ten years later, in 1990, that the new T4 model was introduced and positioned the engine at the front . It was inevitable that the front engine would replace the rear, but many enthusiasts were saddened by the end of the rear engine.  However, it was very successful, and stalled the appearance of the T5 by 13 years. In America, the T4s that were sent to Winnebago’s were converted to campers, whereas all the others were vans or passenger carriers, filling the market for middle sized vans.  Westfalia continued their conversions with a pop-top roof, bed, kitchen, refrigerator and overhead bed.  When the production of the T4 finished, the T5 moved seamlessly into the breach.

Its appearance closely resembles the T4, but is not available in America or Canada.  Instead, Volkswagen manufactures a special van for the American market called the Volkswagen ‘Routan’ which is a passenger van like the Chrysler's Dodge Grand Caravan. The T5 is available in Mexico however. Until the advent of the new T5 generation in 2004, Volkswagen never made a factory-fitted camper. The manufacture of VW camper vans has been spread over the globe.  In the 1990s South Africa started manufacturing T25s in a slightly modified form, with larger windows and a smaller engine compartment; it was ended in 2002.  In 1967 Germany stopped the production of the VW bus and it was left to Brazil to continue its manufacturing up to 1975.  The ‘Bay’ was built in Germany between 1968 and 1979, but again Brazil kept on producing this model into the 21st Century. Brazil continues to manufacture the Bay camper in the form of the T2cs, a hybrid of the original, and a little beauty she is too – all the charm with none of the problems of having a vintage bus!
Tweet