The VW Type 2 was used for a variety of emergency vehicles: as an ambulance and a diminutive but fully equipped fire truck complete with extending ladder; they were also made to function as police vehicles and emergency tow trucks.

The VW factory kept producing new models. All in all there were 30 models including ice-cream vans!  The success of the Transporter gained pace very quickly during the 50s and by 1960 over half a million were sold in 28 countries. 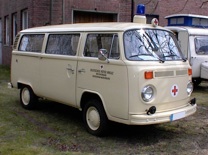 The pictured orange halftrack van was a conversion of w hich only one is thought now to exist. It was promoted as ideal off road conversion for use in snow and sand, but the idea never caught on.

The most fascinating and darkest aspect of the Type 2 I have come across, however, is the model produced solely to function as a hearse!