The many faces of the Type 2 van suggest that the infamous Splitty has more than just a Split personality - it seems to be more a case of multiple personality syndrome.

The VW van is instantly recognizable around the world, and no model has made as big an impression on the collective consciousness as the fabulous Type 2, especially the split windscreen model with its sweeping v-line front and large VW emblem. The Type 2 (or Splitty as it is affectionately known) began its journey in 1949 with a modest 1130cc engine. Between 1960 and 1961 over 300,000 ‘Splitties’ were produced, making Volkswagen the third biggest vehicle manufacturer in the world. 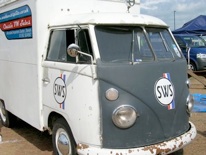 This earlier split screen model had conventional side doors, unlike the sliding door of the later bay window van which was introduced in 1968. Built like a tank, the VW Type 2 van is most well known in the form of the converted caravanette. Aside from the factory conversions, there were many available from third-party companies, some of which were offered through Volkswagen dealers. The camper’s not so well known but equally appealing alter egos however, may be surprising to the uninitiated.

In 1952, Volkswagen created the single cab pick-up truck. This vehicle as well as the crew pick-up with double cab length, the panel van and minibus, were all originally used for everyday activities such as construction or farm work, and for transporting school children or workers. Then there is the Samba, a rare 23 windowed microbus with full length sunroof and skylights, which was introduced in 1950. It has a dedicated following of devotees in its own right. 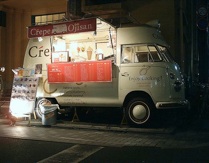 Both the Splitty and bay window vans also appeared in some other forms which many both amuse and amaze... I couldn’t believe my eyes when I first saw the Splitties below... they really are something else! 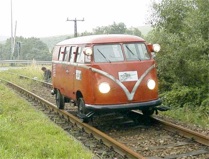 This railbus has train style wheels to enable it to run on the track! For more intriguing variations, go to incredible old VW emergency vehicles in ‘read about‘ and you’ll  see photos of these fascinating creatures. The Type 2 was used as an ambulance, various kinds of fire truck, tow trucks and police vehicles, to name but a few.
Tweet